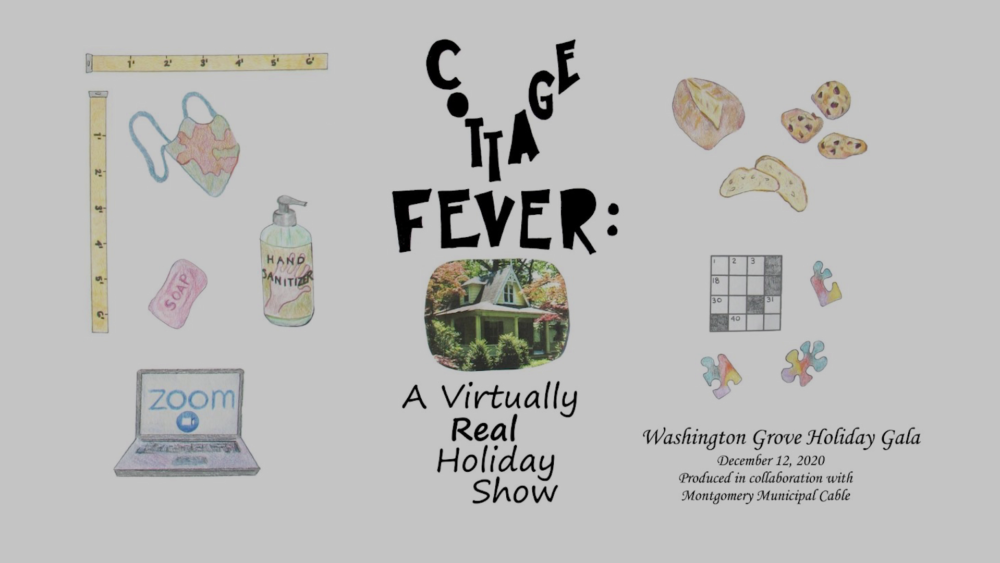 Cottage Fever: A Virtually Real Holiday Show for the Town of Washington Grove

The Town of Washington Grove was unable to hold its annual holiday show in person this year,  but townsfolk came up with a clever way for the show to go on and for residents to participate in this time- honored tradition – in the cast, as musical performers, and as production crew.

If you do not live in the town or are new to its holiday show, here is all you never knew but always wanted to know about the Washington Grove Holiday Show, a summary written by Judy Mroczka, the Producer/Director/Writer. 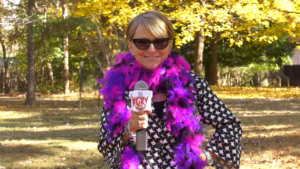 Joe and Moe:  One year, when the electric utility, Pepco, irritated Grove residents by drastically cutting tree branches (“to protect power lines”), Pepco Joe and Pepco Moe debuted, appearing in subsequent shows, often with a chainsaw. [In 2020, in real life, the sewer guys tore up two roads and obliterated several large trees (“root interference”).]  In “As the Grove Turns: A Soap Opera” (2017), Moe and Joe were revealed to be twins separated at birth, even though Moe is about 6’2” while Joe is –uh — significantly shorter.  Last year, curiously, Moe and Joe took over the holiday show.  Spoiler alert:  There is an understudy in the Dec. 12 show.

Santa: At the end of the show, Santa somehow always manages to find our Town Hall and delight the children with gifts.  Hmmm, how do we handle that this year?  Aha!  An enterprising town resident contacted Santa and had him drop off the bags early so parents can present them in the comfort and safety of their own homes.  Problem solved!

Judy, Sign-Meister, Bartender:  Judy always does the intro, Teddy is our tried-and-true Sign-Meister, and Ernie is often pressed into service as a bartender.

Hershey’s: the only bar within walking distance.  Known for its root beer – um, not so much.

Maple Lake:  the town swimming hole, which is technically probably a pond but is named a lake and woe to the newcomer who calls it a pond.  Surf? – um, not so much.

McClelland Castle:  a playhouse/shed located on Chestnut Road in the Grove. The application for a building permit read “Castle.”

Acorn Library: a garage converted into a tiny but wonderful children’s library, lovingly staffed by the person who owns the garage.

Playground: some of the most cherished equipment, such as the horse teeter-totter and the merry-go-round, has been in use for generations.

Fourth of July:  Typically, the Fourth of July parade is preceded by the ceremonial raising of the flag and the shooting (or misfiring) of several antique firearms in the hands of several men in military garb from various cultures and eras.

The Year of the Fox:  In 2020, foxes seemed to proliferate, or at least to make many more daytime appearances.  One even trotted onto the outdoor set while we were filming the show.

Town Officials: In the show, one council member, Gray, plays bass in the band LERD. Another, Charlie, dances with his wife Mary.  Bob, the chair of the HPC (Historic Preservation Commission) makes a cameo in a less active role.

Band: Regarding the band, Eddy Viscosity and the Turbulent Core, Eddy Viscosity is not a person!  It has something to do with science.  [“The eddy viscosity hypothesis is a core element of a mathematical model that describes turbulent flow next to a solid wall that is based on a macroscopic description of turbulent flow.”]  The group was formed by a bunch of musicians who also worked at NIST (National Institute of Standards and Technology).  Three members live in the Grove.

It Takes a Village: As is traditional, everyone who wants to be in the show can be in the show! This year, some 25 people had speaking roles, with another 16 or so in cameo roles, as well as 16 on the production crew.  There are seven “live” Grove-based musical acts, featuring 22 different performers; a dance retrospective with more than 30 dancers taken from videos of previous shows; plus the Grand Finale, which features, well, a whole bunch of people.